The past few months have been filled with warm weather activities for the Rover Crew. Just prior to Xmas, we had our annual progressive dinner, which finished at Matt Le’s place, where even toy crossbow competitions were held!

From January 1st – 4th we ran a Surfcoast Adventure Tour, as part of the Australian Moot, which is similar to a Jamboree.

Seven Old Scotch Rovers helped run the tour, which started at Maffeking Park, near Yea (The Moot Site). We travelled down to the Mornington Peninsula, before ending up in Anglesea, taking lessons in surfing and ocean kayaking. Phil Schneider quickly found out why helmets are compulsory for the latter!

The last night was spent at Anglesea pub, where some of us partook in the inaugural Anglesea pub Joke-Off. All participants, which included 2 from Norway, 2 from New Zealand and 1 from Sweden, enjoyed themselves thoroughly.

Lisa List kindly invited the Crew to join her annual water-skiing get together, during the Australia Day long weekend, on the Murray River near Tocumwal. Thanks to the extraordinarily good weather, they enjoyed much swimming, both in the sunshine and by moonlight. 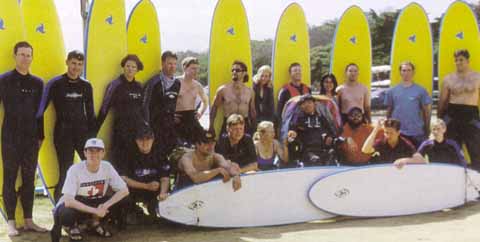 On the way up, Paul Sheer, Nigel Walliss, Emily Tham and Matt Le discovered that new technology, in the form of self-tightening straps, isn’t always as effective as the good old truckie’s hitch and rope. They claim that one of the straps broke, but they still managed to lose many personal items off the back of their trailer, including Matt’s sleeping gear!

Paul Sheer and Phil Schneider took the opportunity to go gliding while in Tocumwal and both came down with their most expensive headache ever! The view and the feeling of controlling a glider however, were well worth it.

Events in the near future include a hike in Kinglake, bowling against the Hargrave Rovers and running a stunt at Hoadley Hide.

Old Scotch Rovers is for anyone aged 18 – 26 years, interested in outdoor, social, and adventurous activities.