L to R: Paul Sheer (’95), Ben Hallenstein (’99) and Matthew Lê (’95).Busy Rover CrewThe Old Scotch Rover Crew has been busy over the past few months preparing its buggy for competition. The next few months are also looking hectic with trips to New South Wales and Queensland.

For the first time in serveral years, the Crew was able to enter a buggy into one of the major Rover racing events. The event was called ‘Buggy Bash’ and was held on a property near Rokewood. Various Crew Members have been working over the past few months to get the car running and up to the required safety specifications. Despite no one in the crew knowing anything about cars, it was ready for the event and the Crew came twelfth out of a field of twenty-five. More photos can be seen at http://beam.to/osrc.

During the September holidays, the crew took part in camps for other sections of the Scout movement. This included running a camp at Mt Disappointment to help Venturers achieve their Queen’s Scout Awards.

Over the New Year, five members of the Crew will be going to Queensland to attend the 15th Australian Moot. A moot is a gathering of Rovers from around the world for what is essentially a 10-day Jamboree. The Crew will also be going to Tocumwal in January for its annual Water Skiing trip. The Crew meets on Monday nights and tries to get away on the weekends as often as possible. 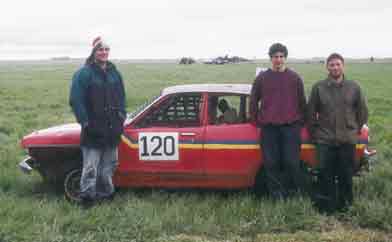