For many Old Boys who have been part of Scouts at Scotch, Elliott Lodge will hold great memories of camping with their patrols and enjoying the serenity of the lodge and its bush setting..

Elliott Lodge is an 80 hectare property on Chum Creek Road, nine kilometres from Healesville. The property, originally of five acres (two hectares) was donated for Scotch Scouting purposes by Major General Harold Edward ‘Pompey’ Elliott (1878-1931), a senior Australian army officer during World War I. The property and lodge are named for him. Pompey Elliott’s son, Neil Campbell Elliott (1912-1939), attended Scotch from 1925 to 1930, and was a Scotch Scout.

The school bought additional properties surrounding Elliott Lodge over a number of years, and maintains the Scout group and the Elliott Lodge property..

Above the fireplace in the Scout hut known as Elliott Lodge (named for Pompey) is a plaque honouring the memory of Neil Elliott, who died at the age of 27 in 1939 while working as a patrol office in New Guinea. He was speared to death while exiting a hut in a native village.

The inscription on the plaque reads: ‘Neil Campbell Elliott, a member of the Scotch College Scout group, 1927-35, killed while on patrol duty in New Guinea, July, 1939’. The circle and dot above the words on the plaque translate to ‘I have gone home’ in the tracking marks that many Scouts have used in their bushcraft.

Next time you find yourself in the lodge, spare a thought for a Scout from Scotch College who gave his life to help those in Papua New Guinea, in a time before the war and Papua New Guinean independence.

Recent Rover Crew activities have included a relaxing Australia Day weekend camp at Surfmoot in Anglesea, along with about 500 other Victorian Rovers, pleasant nights canoeing along the Yarra, painful nights walking the Thousand Steps in Ferntree Gully, and simple nights at the Den.

Old Scotch Rovers welcome to their ranks anyone aged from 18 to 26 years who is interested in outdoor, social and adventurous activities. For more information, please visit oldscotchrovers.org.au. 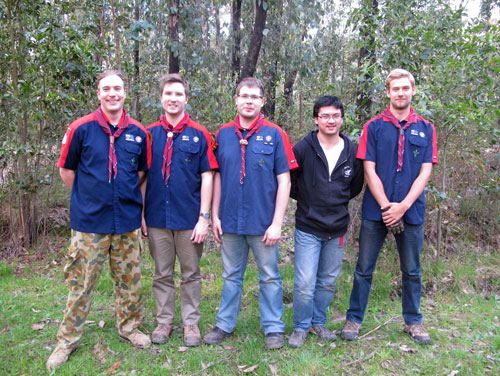