The word is getting out about the Scotch Rover Crew and the fun times it’s enjoying. The crew now has 23 members, more than double its size at the same time last year.

It has been a very busy time for the crew. Last December we decided that our new executive committee would again be led by Euan Anderson (’01), with one of the newer members, Rob Haylock, as assistant crew leader – a great leadership duo.

The Rovers enjoyed a relaxing Australia Day weekend camp at Surfmoot (Anglesea), along with about 500 other Victorian Rovers. Not so relaxing but certainly exhilarating was the experience of the three Scotch Rovers who participated in skydiving, an experience they thoroughly enjoyed and would do again! 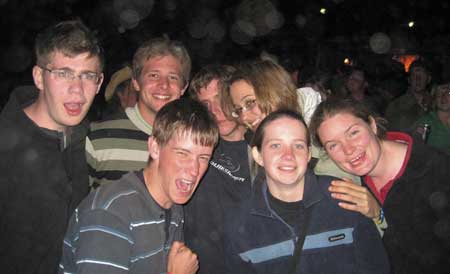 In early February, two members cruised the South Pacific, visiting Fiji and Vanuatu. A total of 39 Rovers from around Australia enjoyed a crazy fortnight of fun and relaxation. Meanwhile the rest of the crew got up to a mixture of activities, including a little cruise of their own to Herring Island on a raft they had made the week before. Fortunately, everyone survived.

During the first weekend in March, several Rovers headed up to our region’s camp, Manimoot, for yet another social weekend with fellow Rovers, while other members went to Anything Goes, a Venturer camp, to help out and run activities.

Coming up, we have the annual camp mudbash, where we will race buggies that some crews have been working on throughout the year.

At the end of the year it’s Aussiemoot, to be held in NSW. Several crew members have already booked for the two-week event, and are looking forward to meeting old friends and making new ones.