The Old Scotch Rover crew has had a very busy year. There have been quite a few older members booted/socked from the crew, and there has been a great many new members join the crew. It seems as though the crew is having a fresh start with new people and an extended Den, and we are extremely fortunate that we have been able to obtain this extension to accommodate the growth of the crew. It is here we would like to thank Mr Chris Taylor for organising and pushing for us to be better accommodated, and to the Scotch College community for providing the resources for the extension.

We have been a relatively busy crew, and a very involved crew at that! We are very supportive of events happening around us, such as Camberwell Showtime, and I am sure that our involvement in the show will become stronger. We have even recruited several of the newer members from it (as pictured with every Scotch Scouting member involved in the show).

Some of our members headed down to Tasmania over the New Year period to take part in the Australian Rover Moot (a large gathering of about 600 Rovers from around Australia with some international guests). The annual End of Year Trip was this year located down at Rye at Andrew Garde’s (’97) parent’s holiday house, and to them we are extremely thankful for allowing us to stay there for the week – a great risk, allowing Rovers to run riot in a holiday house! But a great time was had by all, visiting the great wineries in the area, the challenging mazes, and investing Claire Maddison into the crew at sunset on the end of a pier, something I am sure she will never forget.

We have a big year planned and it should be an exciting one at that. Firstly, five of us are heading over to New Zealand to take part in their NZ Moot in late March–early April. More activities closer to home involve meeting up with some of the other crews in the area and doing activities with them, as well as attending an event which has only just returned to its original form (and is true to every Rover’s heart) – Mudbash! (buggy racing). So we are getting ours up and going and will compete against the best of the crews in Victoria.

We would like to congratulate James Stewart (’97) on being Region Rover Council Chairperson for the past two years. James is also involved at State level as Computer Systems Officer, as well as working with the National Rover Council as Website Administrator. Andrew Garde (’97) has also been very active outside the crew, being Scout leader for the 2nd/6th Hawthorn Scout Troop, and is assisting the Scotch Scouts where possible.

On another note, for our 73rd anniversary this year, we are planning to start an Annual Night (TBA!). If you are an ex-member, and would like to attend, please contact Katherine McDonald on 0410 277 082. This will hopefully be on the first weekend of June. 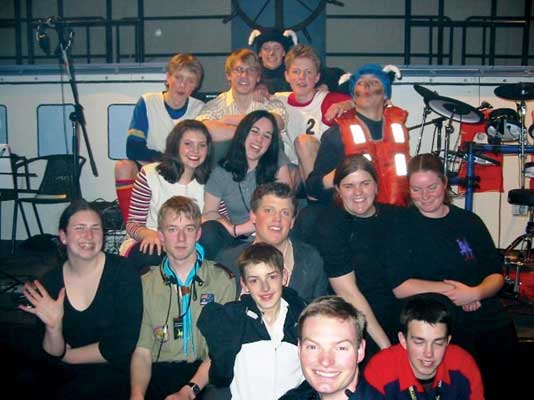