The Old Scotch Rover Crew has had an extremely active, creative and instructive time over the last few months. We began the year with a trip to Rosebud which included horse-riding, go-karting, kite-flying, lazing on the beach and some thought-provoking games to get to know one another. Our trip for the end of this year is already in the planning stages – a week in the Blue Mountains where we will be rock-climbing, canyoning, liloing, canoeing and hiking. We spent some time practising some of these skills in the warmer months, including a trip to Tocumwal-on-the-Murray with ex-crew members Lisa and Brad. As well as challenging and physical activities, the crew has been involved in service, with Clean Up Australia Day in March (no canoes were capsized while cleaning Gardiner’s Creek, but one took on a little bit of water going over some rapids – filling it to the seats!), donating blood and assisting with catering on the two Ideals Courses run by the Scotch Venturer Unit.

A new activity for the crew was a night at the Copacabana ballroom learning to dance “Ceroc” style. This was a little challenging for some but by the end of the night we had attained a level of grace and style! Creative muscles were flexed on our Photo Scavenger Hunt, where teams were challenged to dance on roundabouts, do handstands, human pyramids, and cram the entire team into a photo booth. Our culinary skills extended beyond the camp-fire for a Dessert Night (May) and A Finer Things In Life Night (June), where various crew members shared some of their expertise with wine, food and above all, chocolate! And to keep our Scouting skills in tune, we had a great weekend at Elliott Lodge, Healesville, in June practising knots, navigation, first aid and discussing the relevance of Scouting, Scout Laws and Rovers to our lives today.

Some personal achievements of special note in the past few months include our farewell to Phil Schneider (’94) in February. Phil was a strong member of the crew for over eight years and earned the respect of many members of the crew for his enthusiasm, skills and ability to ask penetrating question. He will be missed (although his jokes might not be!). Mark Wilson (’00) completed his Squire Training and was invested as a full Rover in February. Mark’s training included a hike in the Cathedral Ranges last year and his service project for the crew consisted of collating our many photos into an album. Many members of the crew also attended the wedding of Paul Sheer (’95) and Liz Mishura (former crew leader) at the Littlejohn Memorial Chapel in March. This special occasion was a great opportunity to meet up with old crew members and Old Boys. We wish Paul and Liz all the best for the future.

In the next few months the crew will be enjoying the snow fields, with cross country skiing as part of the 21st birthday celebrations for Ben Hallenstein (’99), a trip to Mt Baw Baw in late August and a snow camp in mid-September.

The Rover Crew are always looking for new members, aged 18-26. Contact details and more information are available on our website: http://www.oldscotchrover.org.au or through the OSCAnet site. 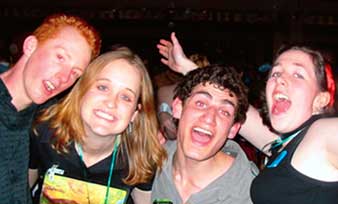